R. Scott Ireland has lived in South Florida since the age of six. His educational background includes a Bachelor of Fine Arts degree in music performance, and a Master of Business Administration Degree in finance. Scott has also passed the Uniform Certified Public Accountants examination, and he holds a ranking of Candidate Master in correspondence Chess from the U.S. Chess Federation.

As an avocation, Scott has pursued lifelong interests in Astronomy, nature photography (including astrophotography and underwater photography) and Chess. He has been a member of the Southern Cross Astronomical Society, one of the nation’s largest astronomical organizations, since 1983. He is a past President, and one of only seven individuals who have ever been honored with a life membership in the Society, since its inception in 1921.

Scott’s photographs have been published in many books and periodicals, including: 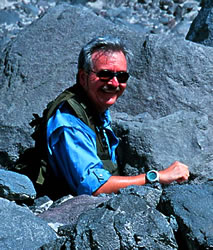 His research results on asteroid occultations have been published in Icarus, a professional planetary scientific journal. Most recently, he participated in the observation of a rare phenomenon on Mars, along with several other astronomers. The results were announced in an International Astronomical Union Bulletin (Harvard-Smithsonian) to observatories around the world.

Over the past few years, Scott has undertaken the study and photography of volcanoes. He is a member of IAVCEI (International Association of Volcanology and Chemistry of the Earth’s Interior) and Volcano Watch International. He recently returned from a trip to Arenal Volcano in Costa Rica, as a member of the National Geographic team filming a documentary entitled Volcano Hunters.